Jesus’ Justice – A Critical Analysis of the “Social Justice” Movement in view of the Majesty, 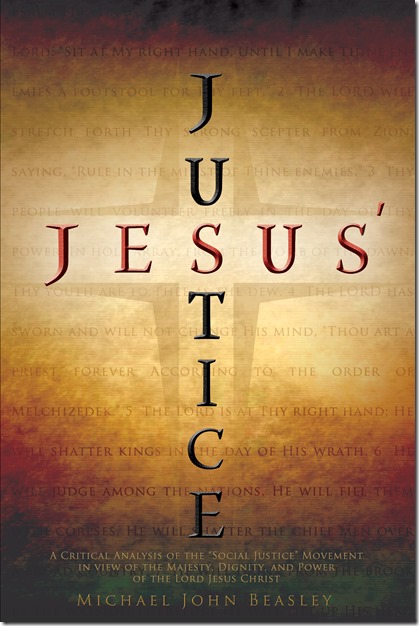 Dignity, and Power of the Lord Jesus Christ: So many of the discussions that we hear today about “Social Justice” are missing the centerpiece of everything: Jesus’ justice. This is not a trivial observation. Those who try to define justice apart from the One who is holy, righteous, and just may as well try to build a sky-scraper without a blueprint or engineer. History reveals that when mere mortals contrive their own definitions and standards of justice, grave atrocities often result, and it may be that such troubling history is about to repeat itself. Many today are proceeding as the torch-bearers of a new pathway to justice, fully arrayed with an army of academics, conference speakers, and New York Times best sellers. They are also armed with a unique, Social Justice dialect in which they dispense broad accusations of “white supremacy” and “systemic white racism” against modern society and even the church of Jesus Christ. Because of this movement’s enormity and repeated accusations, it would be highly  dangerous to imagine that this ideology will go away anytime soon. For this reason, this book compares and contrasts the standards of Social Justice ideology (SJI) with that of Jesus and His holy justice. By this comparison, we will discover that the modern ideology of Social Justice  blasphemously contradicts the Lord’s justice by heralding the wisdom of man above God (chapter 1); by seeking to remedy past injustices with present day injustices (chapter 2); by seeing oppression (whether real or perceived) as establishing personal merit and innocence (chapter 3); by promoting faulty views of God’s creation of the human race and therefore advancing an abundance of ignorance and racial bigotry (chapter 4); by advancing its own doctrinal creed and religious system of atonement that supplies no real solutions or true hope (chapter 5); by fostering bigotry, hatred, and resentment against others on the basis of their epidermis (chapter 6); by mutilating history to such an extent that the triumphs of the Gospel, both past and present, are grotesquely obscured (chapter 7); by replicating a racial bigotry that is comparable to some of the worst expressions of bigotry from the past (chapter 8); and by falling short of any comprehensive understanding of universal sin, systemic evil, and God’s sovereign providence over all (chapter 9).

By this comparison, we will discover the bankruptcy and dangerous nature of this man-made philosophy which has become a religion for many.  This comparison will also reveal what Scripture describes as the greatest contest in human history in which “the nations rage against the Lord and His Anointed” King (Psalm 2). And who is this Anointed King? He is Jesus Christ, the exalted  Redeemer (Psalm 110:1) and “King of Righteousness” (Psalm 110:4) who will someday judge the living and the dead in His perfect and holy justice (Psalm 110:5-6).

In the end, without a serious consideration of Jesus and His justice, nothing else really matters.

Back cover: “Over the past decade or so, lots of half-baked, highly controversial notions about justice and social equity have been proposed, Tweeted, sloganized, mindlessly embraced, and endlessly echoed by evangelical thought leaders. Michael Beasley takes time to consider the biblical definition of justice with meticulous care in this extremely helpful and eminently readable work. If you are confused by all the current rhetoric about ‘social justice,’ woke ideology, and the drift of the broad evangelical movement, you must read Jesus’ Justice.”
Phil Johnson, Executive Director of Grace to You

This entry was posted in Justice. Bookmark the permalink.