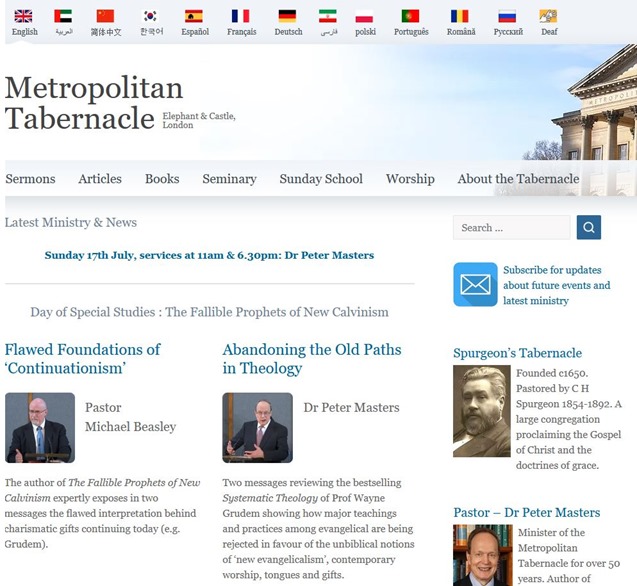 This past Monday afternoon (July 11th), Sandra and I returned from our brief visit to the UK, one day before our 36th year anniversary. The central reason why we were there is because I had been invited to speak at the Metropolitan Tabernacle Baptist church’s conference (July 2nd) and pastor’s fraternal (July 4th) regarding the subject of “fallible prophecy” (based upon my 2013 book, The Fallible Prophets of New Calvinism). In addition to this, I preached the Sunday morning service (July 3rd) concerning Paul’s request for prayer in 2 Thessalonians 3:1-2. For this privilege and opportunity, I kindly thank Dr. Peter Masters and all the brethren at the Tabernacle. 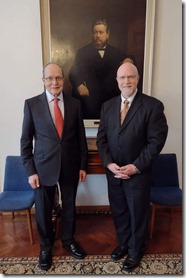 Originally, I had been scheduled to speak at the Metropolitan Tabernacle in July of 2020, but this was cancelled because of COVID lockdowns and travel restrictions. I was re-invited in 2021, but the continued travel restrictions prevented us from attending once again. As Proverbs 16:9 declares: “The mind of a man plans his ways, but the Lord directs his steps.” I am thankful that the Lord directed our steps to visit with Dr. Masters as well as all the brethren at the Tabernacle this year, and we are thankful for the memories that we now cherish as a result of our time of fellowship in Christ. Despite certain challenges, I am so thankful that Dr. Masters was able to speak at the conference as well as at the pastor’s fraternal. We both share the same concern regarding the Charismatic teaching of “fallible prophecy,” and how it is gravely impacting the church in the modern day. For all of the lectures given at the conference, go to this link. Two of the lectures that I delivered on “fallible prophecy,” as well as the sermon on 2 Thessalonians 3:1-2, are now available on YouTube (below):

Weeks prior to our travels, we arranged to have our stay extended in order to attend 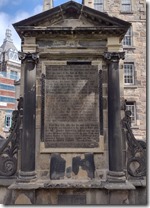 services at the Tabernacle on Wednesday, July 6th, as well as on Sunday, July 10th, the day before our return home. Because of this extension, were able to arrange an intervening visit to Edinburgh, Scotland where we surveyed the history of John Knox and the Scottish Covenanters. We also arranged to have a brief visit at Fulham (an area of the London Borough of Hammersmith & Fulham in West London) where we stayed at an Airbnb near the Thames River. This was intentional in view of the fact that this is the resting place of Mr. Granville Sharp, Esq. (10 November 1735 – 6 July 1813).

But why Granville Sharp?

Every pastor who studies NT Greek knows of the importance of what is called the Granville Sharp Rule – an important grammatical principle that strongly aids in the evaluation of TSKS (article + substantive + conjunction + substantive) constructs in the Greek NT. However, very few know of the massive labors which Sharp undertook in order to demolish the transatlantic slave trade – a labor that would be continued by John Newton and William Wilberforce. Most people know about the abolitionist efforts of Newton and Wilberforce, but fewer still know that Granville Sharp is considered to be the father of the abolitionist movement in the UK.

I too had little knowledge about Sharp’s abolitionist labors until I began writing my most recent book, Jesus’ Justice (subtitled: “A Critical Analysis of the ‘Social Justice’ Movement in view of the Majesty, Dignity, and Power of the Lord Jesus Christ”). When I had nearly completed the manuscript for this work (September 2021), I decided to read some of Sharp’s booklets which contained scriptural rebukes against the slave trade. Upon doing so, I realized that I wasn’t entirely finished with Jesus’ Justice after all, but needed to include key aspects of his writings in my own work: writings which had a profound influence in Britain and the 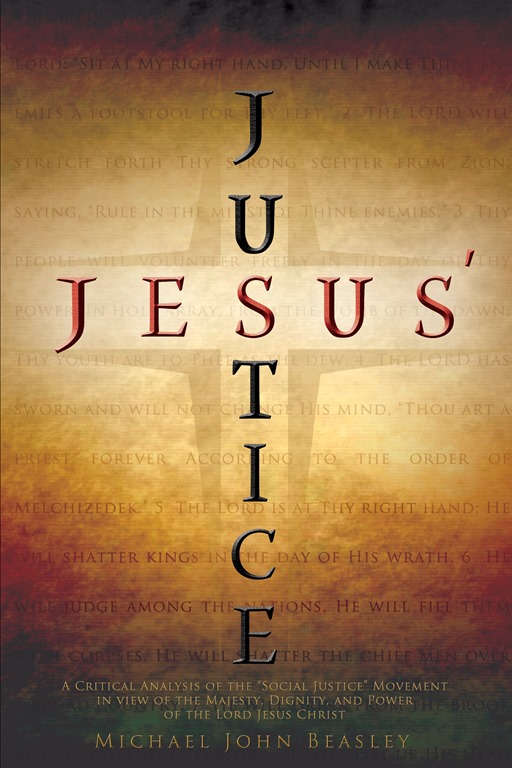 colonies regarding the subject of slavery. Such influence impacted individuals like Benjamin Franklin, John Adams, and, possibly, Thomas Jefferson. Some have speculated that Sharp’s writings may have impacted the drafting of our nation’s Declaration of Independence, especially since Jefferson relied most heavily on Franklin and Adams within the Committee of Five: the very committee commissioned for the scripting and editing of the “rough draught” of the Declaration. Concerning Franklin and Adams, both men corresponded frequently with Sharp, and it was Franklin who duplicated and distributed thousands of copies of Sharp’s work, A Declaration of the People’s Natural Right to a Share in the Legislature (1774), just two years prior to the Declaration. It is my contention that Sharp’s influence may account for an anti-slavery clause which was originally included in the Declaration. Sadly, this was removed in the final version because of the protests of a few states (which I address in my book).

My latent discovery of Sharp’s profound labors added a few more months to the development of Jesus’ Justice, but it was well worth the delay. The work now includes a summary of Sharp’s legal and authorial labors, mostly in chapter 7 and Appendix III (with additional, brief mentions in chapters 8 and 9). I became so impressed with Sharp’s faithful labors for Christ that I ended up dedicating the book to him. 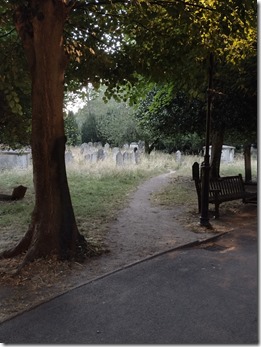 But the relationship between the timing of our visit to the UK and the development of Jesus’ Justice is a remarkable testament to God’s kind providence. As already stated, I had originally been scheduled to speak at the Metropolitan Tabernacle in July of 2020 and was re-invited in 2021, but both years were impacted by COVID restrictions. But it was during this past year (2021) that I took the time to write Jesus’ Justice. Because of this, I believe that our visit to the UK was made especially sweet and encouraging. Not only were we able to fellowship with the brethren at the Tabernacle and visit the resting places of many of the Scottish Covenanters, who remained faithful until death, but we were also able to pay our respects to Granville Sharp, a brother in Christ who faithfully labored for the glory of God by upholding “…the honor of the Holy Scriptures,” as he said. Without that intervening time in 2021, it seems unlikely that I would have discovered the remarkable history concerning Sharp; nor would it have occurred to me to visit his place of rest on this earth. Throughout the development of the book, Sandra and I have had many discussions regarding the prolific writings and legal 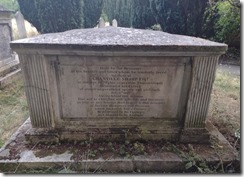 contests of Sharp, and so our visitation to Fulham was a powerful and very meaningful capstone to our overall visit to the UK. The fact that we happened to be there during the 209th anniversary of his passing (6th July 1813) made the timing of this even more profound. All of these factors combined made our brief visit to Fulham quite remarkable, the depth of which is impossible to convey in a brief post like this.

Our one day in Fulham felt very much like an early anniversary celebration. While it may seem odd to some to have such a spirit of celebration after visiting a gravesite, I can assure the reader that our contemplation centered on God’s faithfulness in sanctifying His people for His own purposes; and this 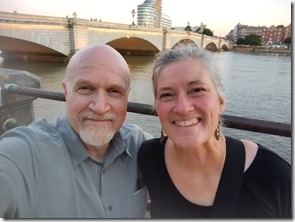 is true, not only in the life of Granville Sharp, but in the lives of all who are in Christ by faith.

After paying our respects to Sharp we were able to witness a breathtaking sunset on the Thames at the very location where Granville and his family would ride a barge while playing musical instruments for the enjoyment of others on the shore (Granville’s love for music is quite evident, especially since he sometimes signed his name as “G#”). We then crossed the Putney Bridge (overlooking the Thames) and enjoyed a meal together where we were given the opportunity to speak to our friendly waitress about why we were in Fulham to begin with: to celebrate the faithfulness of God who saves and sanctifies His people for His ultimate glory. In many respects, our 36th anniversary celebration extended well beyond July 12th, and we thank the Lord for it all.

Though it was hard to depart from London, we are glad to be home once again.